Ancyra, Temple of Augustus and the Queen of Ancient Inscriptions

Ancyra, Temple of Augustus and the Queen of Ancient Inscriptions

“Ankara, historically known as Ancyra and Angora, is the capital of Turkey. Located in the central part of Anatolia, the city has a population of 4.5 million in its urban center and over 5.6 million in Ankara Province making it Turkey’s second-largest city after Istanbul.” 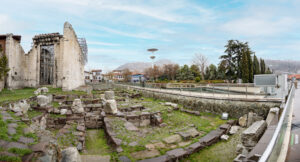 The Res Gestae Divi Augusti (“The deeds of deified Augustus”) was the performance or accountability report of the first Roman emperor Augustus, a first-person account of his life, his merits, and honors. According to the best-preserved copy, found in Ankara, the work is also called Monumentum Ancyranum. Nobel Prize-winning German historian Theodor Mommsen, who has also written a comment that is still important today, described the Res Gestae as the “Queen of ancient inscriptions”.

We asked Ankara-born Tourist Guide Pelin Özbayoğlu the story of Res Gestae Divi Augusti. Almost all of the photos of our article were taken by Ankara-born photographer Melih Özbek.

Dear Pelin, what is the story of the Temple of Augustus?

In 25 BC, Ancyra, the capital of Galatia State at that time, passed from the Phrygians to the Roman Empire control. The hill, where the temple is located, is also referred to as the Holy Temple Hill during the Phrygian period, previously there was also a sacred structure here, which was dedicated to the Phrygian Gods Cybele and Men but collapsed as a result of heavy damage over time. It was built by Pilamenes, the son of the last Galatian ruler Amintas, between 25 BC and 20 BC, as a token of allegiance on behalf of the Roman Emperor Augustus, as well as in dedication to Rome, the local Goddess of the city at that time.

3D Reproduction of the Temple of Augustus, Musem of Anatolian Civilizations

Emperor Augustus, whose real name was Octavianus, was adopted by his great uncle Julius Caesar to come to the throne after him, and with the death of Julius Caesar, the republic period ended in Rome and the empire was re-established. Therefore, Augustus is the first emperor of the Roman Empire.

Why is the Augustus Temple in Ankara?

Because Ancyra was very important then, as it is today because it is a place where all the soldiers who passed to Anatolia and went to the Roman legions were accommodated; on the trade routes, the Silk Road passes through Ancyra and it maintains its importance even in the Byzantine period because Ankara was a city where the Byzantine Emperors spent their summers since it was around 9000 meters high and therefore cool. For this reason, Ankara Castle and its surroundings are very important in historical terms. For these reasons, they build the Augustus Temple in Ankara between 25-20 BC to show their loyalties to Augustus. With the Hacı Bayram Mosque built on this hill in the 1400s, we can say that this hill has been seen as a sacred place for more than 2000 years. 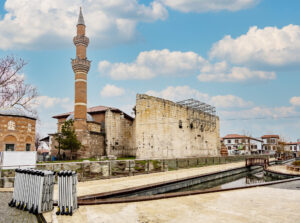 What is the historical importance of this Temple?

The Augustus Temple inscriptions in the Temple of Augustus are very important, it is called the Queen of the Inscriptions. This inscription on the wall of the temple is called Res Gestae Divi Augusti, The deeds of deified Augustus. The Romans deified their emperor after their death; in other words, he becomes both emperor and god for them. Augustus is very important as he was the first emperor of the Roman Empire, ruled for 58 years, and initiated the Pax Romana, Roman Peace. A period when Rome was ruled with great justice, where peace prevailed in the entire Roman empire under the wings of Augustus. 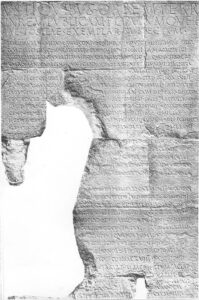 l of this inscription is in Rome, where Augustus died and was buried, but since the original copy is lost, the only inscription the world of archeology and history have is now on the walls of the temple of Augustus. Therefore, it has great importance. The inscription is written in both Latin and Greek, in two languages, and in red paint in an unusual way for that time. Several more copies of this inscription were written on the walls of temples in different parts of Anatolia by Augustus’ will. Almost all of the articles are still legible. This inscription, the original of which was left to the Temple of Vesta in Rome before the death of Augustus after being sealed in 3 or 4 scrolls of parchment, and the original is lost, consists of 3-4 parts. In the first part of the content, the history of Augustus before becoming emperor and the year of his birth, in the next section, the aids and services he gave to the Romans, the restorations he had built, his military achievements, diplomatic activities, and the last part, the amount of money spent for all these are mentioned. In other words, it is one of the most valuable documents describing the most magnificent period of the Roman Empire and archaeologically describing the Roman period, the person who solved the inscription in the 1800s is the German linguist and historian Theodor Mommsen and called this inscription the “Queen of the Inscriptions” because of its importance.

While the temple has a rectangular structure with many columns, it is destroyed over time, and of course, due to Ankara being in an earthquake zone, it collapses and its structure was completely changed and converted into a church during the Byzantine period in the 1400s, the Hacı Bayram Mosque was built next to it, and it continues to remain as a place of worship. In the memoirs of Busbecq, a traveling diplomat sent there by King Ferdinand I of the Netherlands in 1555, we learn that the temple was in ruins at that time. 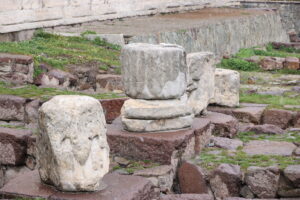 Professional photographer and photography instructor Melih Özbek says that his interest in photography comes from his father. Melih Özbek, who has been taking photographs for more than 30 years, has been taking digital photographs since the 2000s. Özbek stated that his life changed with a bird photo he took in 2004. He is one of Turkey’s first nature photographers. Since 2009, Özbek has been shooting professionally and organizing photography-related training in his photography studio. Since 2013, he has been teaching part-time photography at Hacettepe University. Özbek, who mostly enjoys taking nature and especially bird photos, has traveled to every nook and cranny of Turkey and knows Turkey very well. The historical place he enjoyed photographing most is the Temple of Aphrodisias in Aydin. 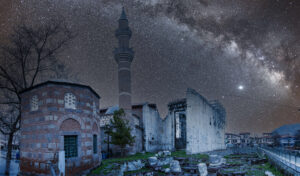 Hacı Bayram Mosque was built during the Ottoman Empire period. It was named after the Turkish Sufi and poet Hacı Bayram-ı Veli on behalf of the latter. The site was added in 2016 to the tentative list of UNESCO World Heritage Sites in Turkey

Hacı Bayram-ı Veli or Haji Bayram Wali ‎(1352–1430) was a Turkish poet, a Sufí, and the founder of the Bayrami Sufi order. He also composed several hymns.