“After years of performing music, I stepped over to the other side of the stage and became a member of the audience. As I observed music and theater, musicals, ballet, and symphony blended in my mind. I kept track of the entertainment sector for years, watching musicals and then studying trade to learn the marketing side of the business. So I said to myself, I come from music and know all about having a good time, so why don’t I entertain people with my music?’’ 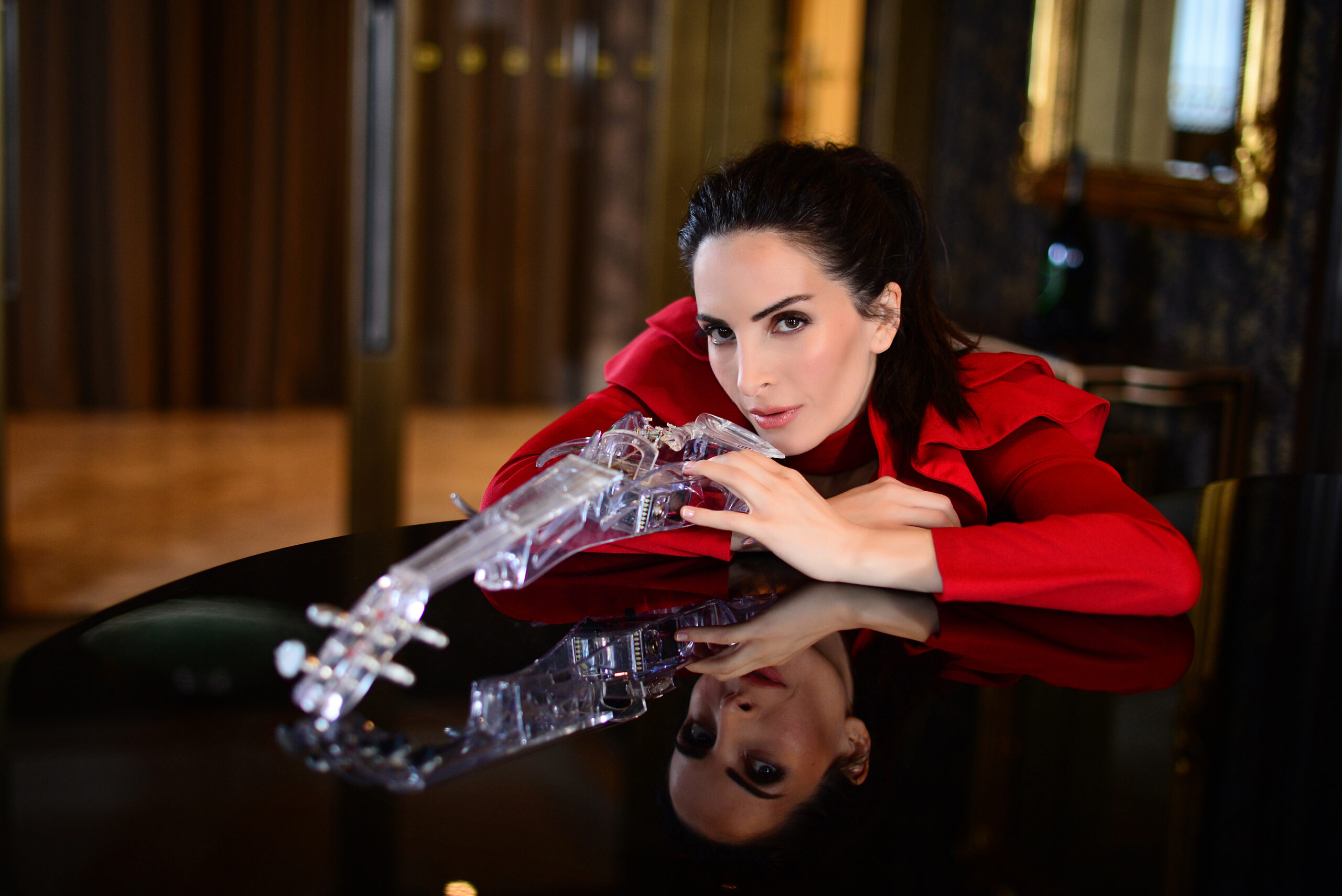 How was the brand Giselle Tavilson created?

I am a dual citizen of Turkey and the United States; the name on my Turkish passport is Gül Taviloğlu, and the name on my USA passport is Giselle Tavilson. I studied at the conservatory in Ankara and then completed my education in business in the USA, the world pioneer in advertising and marketing, therefore I was always aware of the global trade. After all, it would be challenging to create a brand with the name Gül Taviloğlu due to its difficult pronunciation and spelling. For example, the letter ‘’ü’’ is one that native English speakers do not use and cannot pronounce, as well as the letter ‘’ğ’’. I was aware that with this name, my brand would not be as global as I envisioned and that even in the Turkish market, I ought to proceed with the name Giselle Tavilson instead of Gül Taviloğlu. My stage career started in Turkey, but since the day I took that first step in deciding my stage name, I knew that I would go abroad in the future and the doors would not open for me as Gül Taviloğlu. I think the name Giselle Tavilson as a brand has a gorgeous timbre to it and it’s registered by Yetkin Patent & Consultancy.

You were surrounded by classical music in your family home as a child, as if you were born to be a violinist in the orchestra. How did you decide instead to become a performing artist?

Training in classical music is monotonous and requires discipline. When I graduated, I found myself on the way to becoming a performer in the orchestra. I could not be a soloist, as that’s entirely different. In my student days, I had already started to play as an alternate violinist in several orchestras such as the Adana Symphony and Cemal Reşit Rey. Before each concert, we would have 5-6 rehearsals, and it was overwhelming to me to sit there on top of a chair for hours, stolidly playing the violin. In my conservatory years, as I practiced the violin in my room alone, I would motivate myself, ‘’Everything will be great after school,’’ but after graduation I found myself in the orchestra chair once again, in the same monotonous place. I could see that this couldn’t be my life cycle, that it would make me unhappy. During my entire childhood and youth, I was surrounded by artists in a family of musicians. Because when you are born into a family of musicians, you grow up with musicians all around you as friends of the family are also musicians. So I always felt like I was in a snow globe and wondered about the outside world and the people there, about the lives of tradespeople, lawyers, and doctors, since we were surrounded by musicians, artists, and painters. I decided to change my career but in the conservatory, we don’t receive any classes in math or science from 7th grade onwards. So I lacked that framework but I was motivated when the younger of my two brothers, also both musicians, switched careers. After leaving the conservatory and taking mathematics classes for a year, I was accepted into Texas Tech University. And so, I took a break from the violin.

How did you come back to Istanbul and take up the violin again?

After I started a life in the States, suddenly, a series of coincidences were set off although I had no plans of coming back to Turkey. First, my father passed away and I had some health problems. On top of all this, the economy started to go bad after the 2008 mortgage crisis in the USA. As it was, I decided to stay in Turkey. During this period I started seeing my performer friends more often. Having missed music a lot, I started to play the violin again now and then.

You don’t see many entertainers who were trained in classical music because it is a different mindset, and a musician coming from an entertainment mindset does not make a marketer; they tend not to market themselves very well. That’s because up until the point they become famous performers, nobody lends a hand to the performer during the marketing process and that’s where most musicians are held back. Being able to manage the marketing end of the business is what brought me success, and I think one of the first steps in doing that is brand registration. For instance, I would argue that many famous performers have not registered their names and haven’t even thought of it, or nobody showed them the way.

You are currently running a ‘’One Woman Show’’ performance. You design your own costumes, you have a dance group that you work with, what is the background there?

It was actually a dream of mine to put on a show with dancers on stage because I wanted to fill up the stage and make it more entertaining. At that time, I found the right choreographer after a long search and focused on this project entirely, both physically and emotionally, taking a break from my social and private life for two months. Every day I had pilates and stretching, dance classes, and choreography classes; both individually and with the team. I’ve been doing pilates and my exercises regularly ever since to keep in shape. 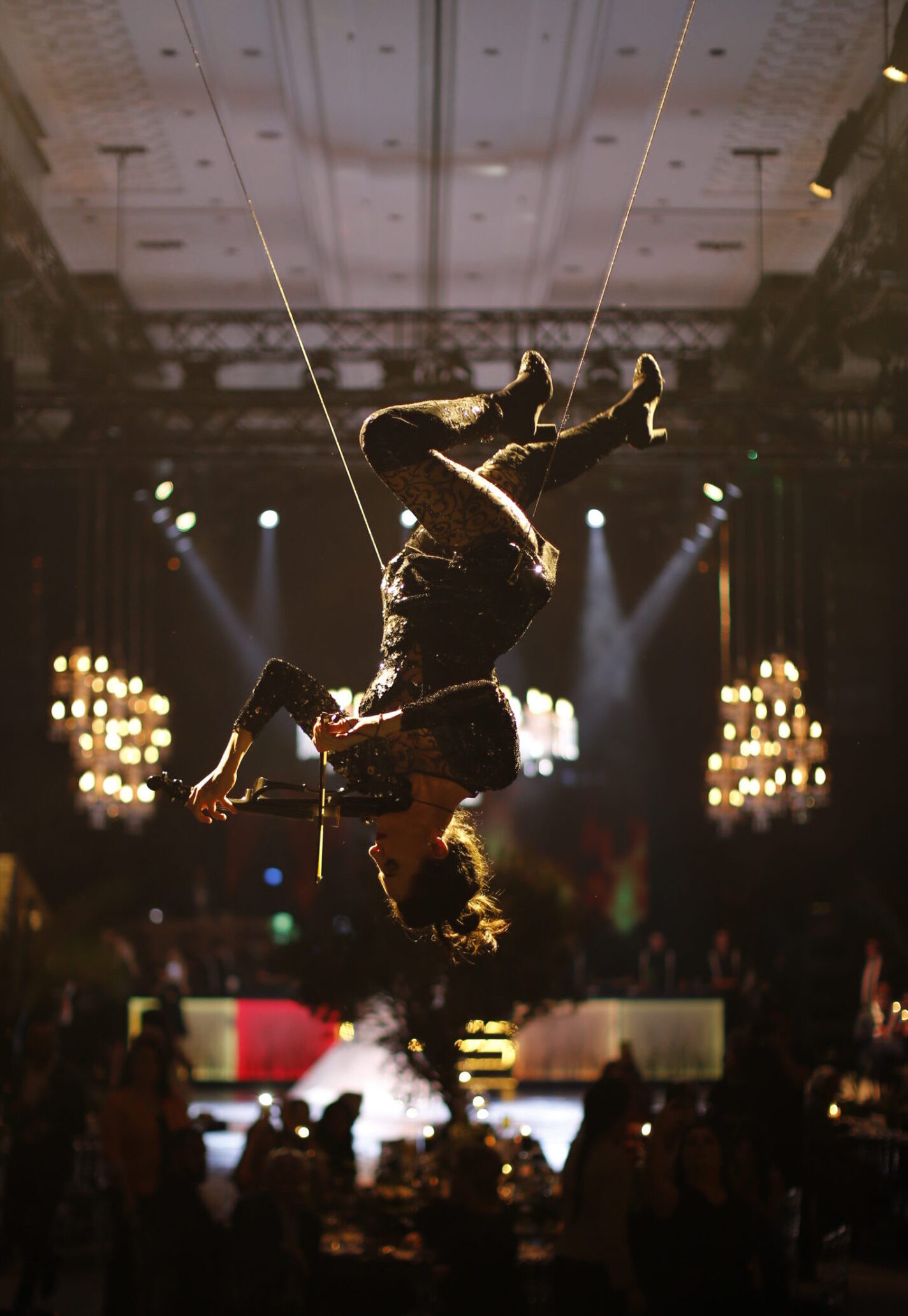 You also have a story about playing the violin up in the air, you are one of the very few aerial violinists in the world.

I wanted to make my distinction as a performance artist loud and clear. In the end, my primary goal was to distinguish myself from the dozens of artists in this line of work. Also, I like competing with myself and facing my fears. In fact, I had stage fright, I worked past that, and then there was my terrible fear of heights, which I also wanted to overcome. It was like killing two birds with one stone. Also as a kid, I was a rhythmic gymnast, and you need to have a strong foundation to be able to do those moves. It requires strong abdominal muscles because everything is controlled by your core. And when you are on the ground, the choreography is on the ground and I play the violin along with the choreography; but being in the air is a different matter entirely since you are going against gravity. For example, when I’m upside down, on one hand, I play the violin; on the other hand, I control my abdominal muscles to try and keep my balance. What I mean is, different disciplines come together at that point. It is challenging but delightful.

How does the audience react, are they very surprised?

At first, as they pull me up, everybody watches calmly. Then when twenty seconds into the show I turn upside down and play the violin, the wows start coming out. And once I start somersaulting in the air, well, they cannot believe what they are seeing.

Which song do you enjoy playing the most?

I love Despacito. It has been years since the song came out, but it is still the one that I enjoy playing the most.

Which of your performances to date was the most enjoyable and unforgettable?

The BigBang award ceremony in Istanbul was lovely as I had prepared a special aerial and laser show for the event. It was a show to remember, accompanied by the James Bond movie soundtrack. And of course, the honor of playing the violin in the presence of Prince Albert at the Monaco Prix was something else. When I took the stage, the spouses, girlfriends, and kids of the Formula 1 pilots got on the stage and danced alongside me. The Formula 1 pilots took the stage right after. Naturally, I was so excited about Prince Albert and Hollywood celebrities watching me that for the first time in my life, I broke out in hives because of the stress.

And playing at the New York gala of Make A Wish Foundation in February 2020 was an unforgettable experience.

So how do you spend your time during the Pandemic?

I’m mostly staying with my mother at our house near the Aegean coast. In the meantime, I started a course in Blockchain, in which I had taken an interest in 2019 because I think keeping up with technology is essential. Within ten years, our lives will be changed by blockchain technology and I am trying to understand the system so I can be a part of it. I think it’s a revolution no less significant than the internet.

Also, my father has a book on musical harmony that was left incomplete due to his abrupt passing. Harmony already means the mathematics of music, and my father designed this book in a language comprehensible even to non-musicians; however, he passed away before he could finish it. A valued student of his and I are working together to prepare the book for publication. My father was a scholar of classical music and a composer, the first in Turkey to compose a clarinet concerto.